This calendar reflects SHUC congregation programs and events only. Community group bookings, events and space rentals are not included at this time. 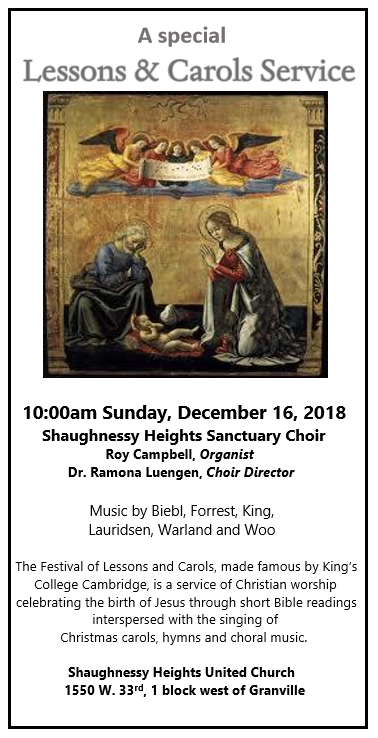 The prophet foretells of the peace Christ will bring

A READING from Isaiah 11: A shoot shall come out from the stock of Jesse, and a branch shall grow out of his roots. The spirit of the Lord shall rest on him, the spirit of wisdom and understanding, the spirit of counsel and might, the spirit of knowledge and the fear of the Lord. His delight shall be in the fear of the Lord, but with righteousness he shall judge the poor, and decide with equity for the meek of the earth; The wolf shall live with the lamb, the leopard shall lie down with the kid, the calf and the lion and the fatling together, and a little child shall lead them. The cow and the bear shall graze, their young shall lie down together; and the lion shall eat straw like the ox. The nursing child shall play over the hole of the asp, and the weaned child shall put its hand on the adder’s den. They will not hurt or destroy on all my holy mountain; for the earth will be full of the knowledge of the Lord as the waters cover the sea.

A READING from Luke 1: In the sixth month the angel Gabriel was sent by God to a town in Galilee called Nazareth, to a virgin engaged to a man whose name was Joseph, of the house of David. The virgin’s name was Mary. And he came to her and said, ‘Greetings, favoured one! The Lord is with you.’ But she was much perplexed by his words and pondered what sort of greeting this might be. The angel said to her, ‘Do not be afraid, Mary, for you have found favour with God. And now, you will conceive in your womb and bear a son, and you will name him Jesus. He will be great, and will be called the Son of the Most High, and the Lord God will give to him the throne of his ancestor David. He will reign over the house of Jacob forever, and of his kingdom there will be no end.’ Mary said to the angel, ‘How can this be, since I am a virgin?’ The angel said to her, ‘The Holy Spirit will come upon you, and the power of the Most High will overshadow you; therefore the child to be born will be holy; he will be called Son of God. Then Mary said, ‘Here am I, the servant of the Lord; let it be with me according to your word.’ Then the angel departed from her.

Hail Mary, full of grace, the Lord is with you. Blessed are you among women, and blessed is the fruit of your womb, Jesus. Holy Mary, Mother of God, pray for us sinners, now and at the hour of our death. Amen.

The birth of Jesus

A READING from Luke 2: In those days a decree went out from Emperor Augustus that all the world should be registered. All went to their own towns to be registered. Joseph also went from the town of Nazareth in Galilee to Judea, to the city of David called Bethlehem, because he was descended from the house and family of David. He went to be registered with Mary, to whom he was engaged and who was expecting a child. While they were there, the time came for her to deliver her child. And she gave birth to her firstborn son and wrapped him in swaddling clothes, and laid him in a manger, because there was no room for them in the inn.

O great mystery and wonderful sacrament, that animals should see the new-born Lord, lying in a manger.

Blessed is the Virgin whose womb was worthy to bear our Saviour, Jesus Christ. Alleluia!

The shepherds go to the manger

A READING from Luke 2: And there were in the same region shepherds abiding in the fields, keeping watch over their flock by night. And lo, the angel of the Lord came upon them, and the glory of the Lord shone around them, and they were sore afraid. But the angel said to them, “Fear not: for, behold, I bring you tidings of great joy, which shall be to all people. For unto you is born this day in the city of David a Saviour, who is Christ, the Lord. This will be a sign for you: you will find a child wrapped in swaddling clothes, lying in a manger.” And suddenly there was with the angel a multitude of the heavenly host, praising God and saying, “Glory to God in the highest heaven, and on earth peace among those of goodwill!”

Glory to God in the highest, and peace on earth to people of good will.

We praise, we bless you, we adore you, we glorify you, we give you thanks for your great glory.

When the angels had left them and gone into heaven, the shepherds said to one another, “Let us go now to Bethlehem and see this thing that has taken place, which the Lord has made known to us.” And they went with haste, and found Mary, and Joseph, and the babe lying in a manger.  And when they saw it, they told everyone what had happened and what the angel had said to them about this child. And all who heard it were greatly astonished. But Mary kept all these words in her heart, and pondered them.  And the shepherds returned, glorifying and praising God for all they had  heard and seen, as it had been told them.

The wise men are led by the star to Jesus

READING from Matthew 2: In the time of King Herod, after Jesus was born in Bethlehem of Judea, wise men from the East came to Jerusalem, asking, ‘Where is the child who has been born king of the Jews? For we observed his star at its rising, and have come to pay him homage.’ When King Herod heard this, he was frightened, and all Jerusalem with him; and calling together all the chief priests and scribes of the people, he inquired of them where the Messiah was to be born. They told him, ‘In Bethlehem of Judea; for so it has been written by the prophet: “And you, Bethlehem, in the land of Judah, are by no means least among the rulers of Judah; for from you shall come a ruler who is to shepherd my people Israel.” Then Herod secretly called for the wise men and learned from them the exact time when the star had appeared. Then he sent them to Bethlehem, saying, ‘Go and search diligently for the child; and when you have found him, bring me word so that I may also go and pay him homage.’ When they had heard the king, they set out; and there, ahead of them, went the star that they had seen at its rising, until it stopped over the place where the child was. When they saw that the star had stopped, they were overwhelmed with joy. On entering the house, they saw the child with Mary his mother; and they knelt down and paid him homage.

John the Evangelist unfolds the great mystery of the Incarnation

O Light born of Light, Jesus, redeemer of the world,

with kindness deign to receive the praise and prayer of suppliants.
You who once deigned to be clothed in flesh for the sake of the lost,
grant us to be made members of your blessed body.

Shaughnessy Heights United Church is a place where faith and life can grow. Allow us to welcome you in a journey of lifelong transformation.
Please contact us.